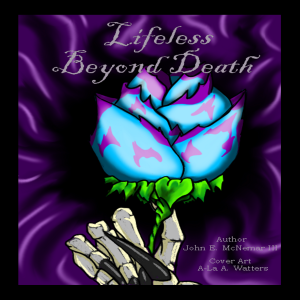 Discover a darkness like no other. The world of Lifeless Beyond Death is a combination of Sci-Fi, Medieval Fantasy and Supernatural. Each character plays a huge part in the storyline, immerse yourself in an epic tale involving an ancient and long forgotten god purposely removed from the analogues of history and a princess of a fallen kingdom in a far distant future where history has in many ways reset itself within a new world built atop that of he old one. A Nekomirian adventurer, a Serious and ancient Crime Boss and many more characters. In this series you will bear witness to the rebirth of Umbara who is reborn as Makoto Masanori, having lived a normal life up until the age of about thirteen Makoto starts having memories not of his own and obtains dark and mysterious powers he never asked for. He soon learns that he is the reincarnation of Umbara and that his path is not an easy one, however his fate and that of this new world all depend greatly upon his choices and rather or not he can accept his past and who he is. Will he become a hero or a villain? LBD follows the story of multiple characters while keeping to one primary character's development as well. [New Episodes Every Sunday Starting 11-21-2021!]